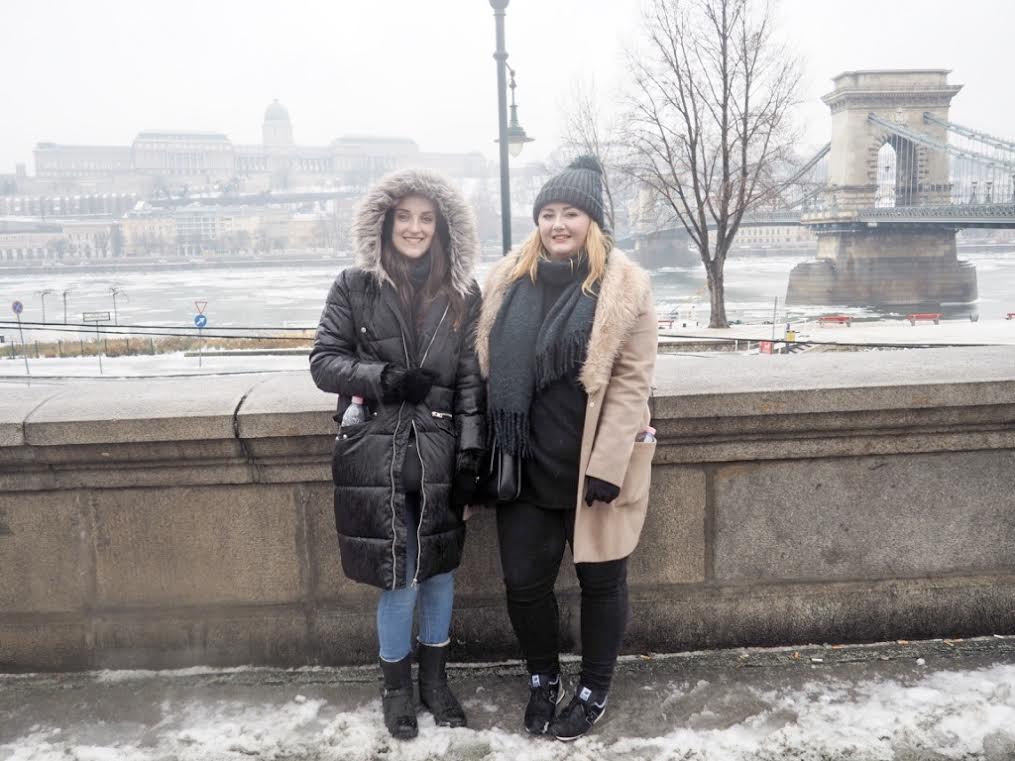 I had the best 72 hours in Budapest and it’s going to be hard to squeeze it into one post but, that’s what my lovely readers voted for!

So, after landing in Budapest at around 1:00pm local time, (Budapest is one hour ahead of the UK!) we headed to the beautiful Prestige Budapest, freshened up and headed for the Metro to get the train to Szechenyi Thermal Baths.

The metro was a cafuffle in itself but for around 700HUFF (around £4) each we got return tickets to the thermal baths. Note: I will never complain about the London Underground ever again, you don’t realise how far ahead technologicaly we are until you see the complete opposite! Hungary’s trains are super cute and basic, but it gets you from A to B which is the main thing!

Such a surreal afternoon, being out in a swimsuit in the snow, whilst bathing in a 38 degree pool! Széchenyi thermal baths were an absolute treat. 3 outdoor pools and 15 indoor ones! Well worth the trip if you ever find yourself in Budapest ✈️ . . . . . #lbloggers #bbloggers #spa #tbloggers #travel #budapest #holiday #thermalbaths

We booked to go to Széchenyi before hand on Tripadvisor. We paid £22 each, which included entrance to the baths and a cabin to change and leave our stuff in. I’d definitely recommend booking a cabin as they’re secure and you have your own space to get changed in.

There are 3 outdoor pools and 18 indoor pools at Széchenyi thermal baths, alongside facilities like cold plunge pools, saunas and steam rooms. I’d recommend checking them all out; we spent around 3 hours here which was plenty of time to relax and try them all. We spent most of our time in the outdoor pool, despite the snow and chilling temperatures! The outdoor pool is a toasty 38 degrees, but it was such a fun experience and probably my favourite part of the holiday! I’ve written a full post on the beautiful Prestige Hotel Budapest, but it truly was a stunning hotel. The location was perfect; it was just a few minutes walk from the river Danube and the Chain Bridge, and it was super close to the Metro station and Big Bus bus stops!

We spent Thursday evening exploring the hotel, and found a cosy little spa room. We chilled out in the jacuzzi and planned for the next day of exploring Budapest!

Our 8am alarm went off the next morning, so we bundled up in our thermals, scarves and coats, and headed out to find some breakfast. 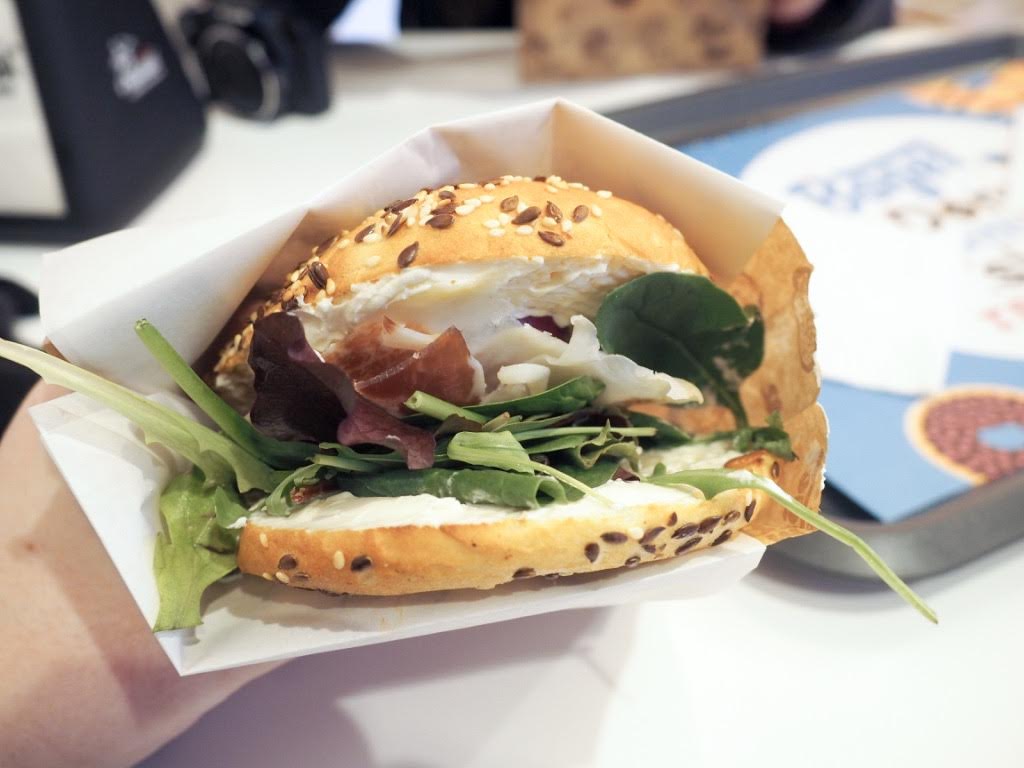 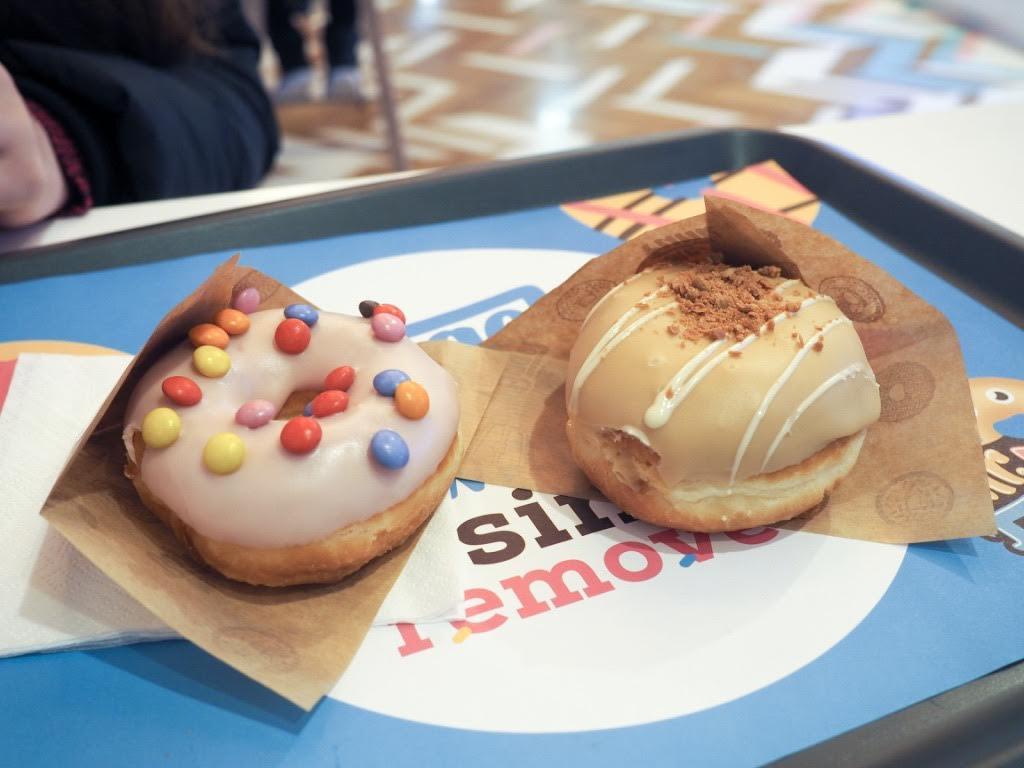 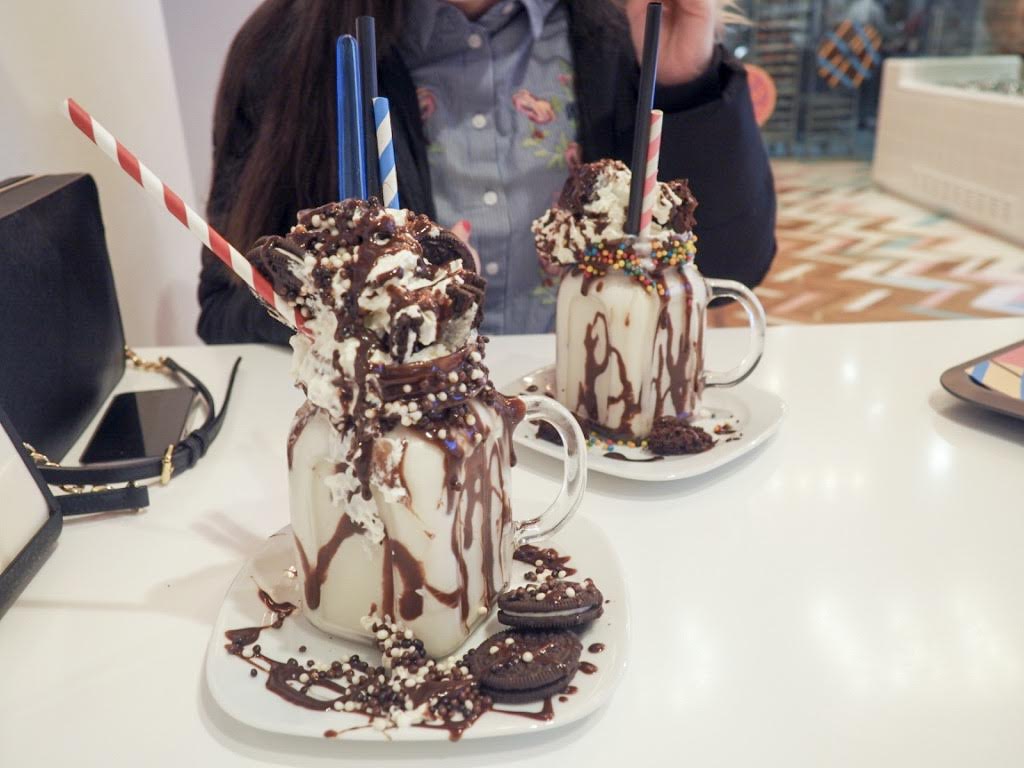 Mr Funk & Ms Bagel was just around the corner from the hotel, so we had bagels and doughnuts for breakfast. I loved this quirky little cafe, the interior was cute, it smelt amazing, (fresh seeded bagels and warm, sweet doughnuts) AND the staff were so nice and friendly – their English was amazing too, which was super handy. Jade went for the cream cheese bagel and I had a parma ham, cream cheese, spinach and onion bagel. The doughnuts were super jealous too, so I’d recommend a trip here for fresh bagels and doughnuts!

We nipped back here on the Saturday night to try one of their Freakshakes and omg, they were so delicious! We hadn’t eaten much all weekend but we pretty much made up for that in these shakes!! 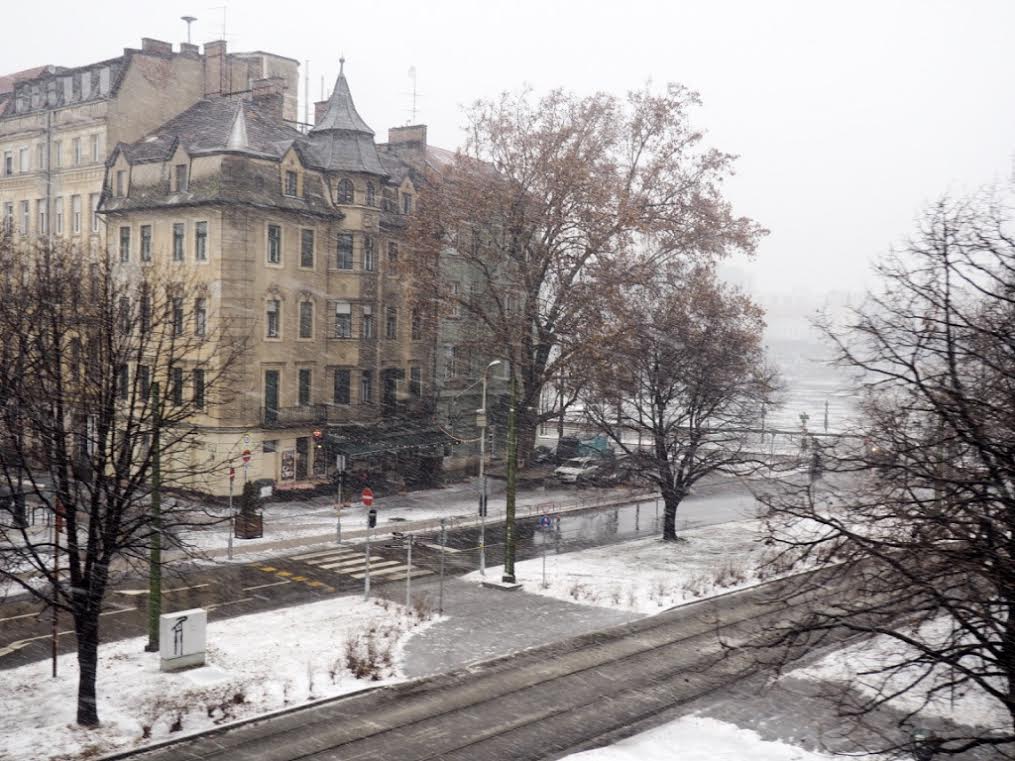 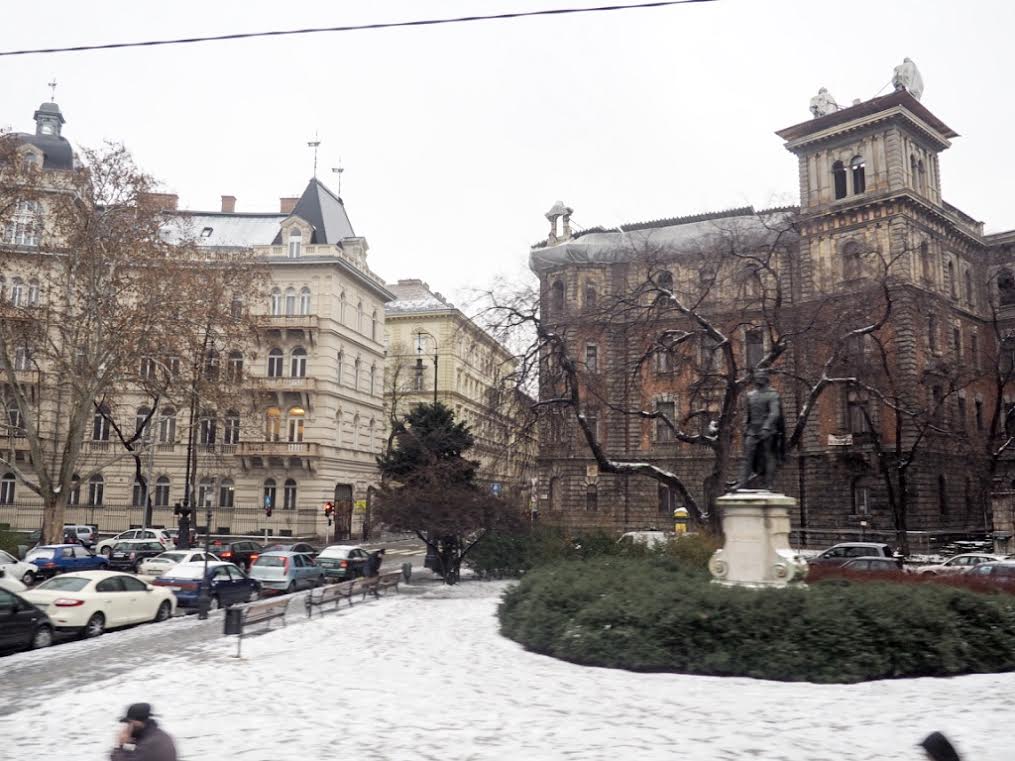 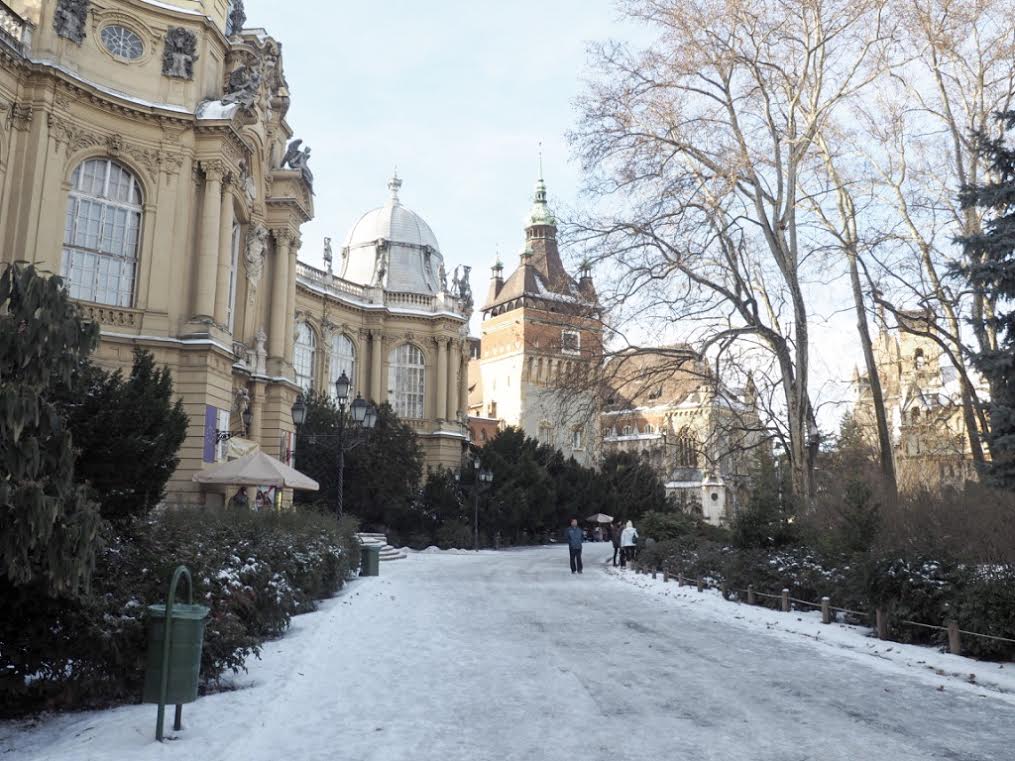 We booked the Big Bus bus tour before hand on Tripadvisor, and used this on the Friday and Saturday. The full route is around 2 hours long, so we sat on the top deck and enjoyed looking at all of the landmarks like the Hungarian Parliament, Margaret Island and Hereo’s Square. You can find the full timetable here. I have never been so cold in my life, but I enjoyed seeing all the places! The weather was awful Thursday, thick snow blizzards and freezing temperatures, but I imagine it would be just as pleasurable in the summer!

We used the hop-on-hop-off bus tour for the two days and it was well worth the money. The ticket price also included free walking tours, a night bus tour and a river cruise.

Sadly, the river was completely frozen over so the river cruise was cancelled, but we did enjoy the night bus tour, which takes a different route around the city, but Budapest looks so beautiful lit up in its golden lights. The only thing with this night bus tour was that they only run one a night, and it’s first come first serve – so I’d recommend getting there early! 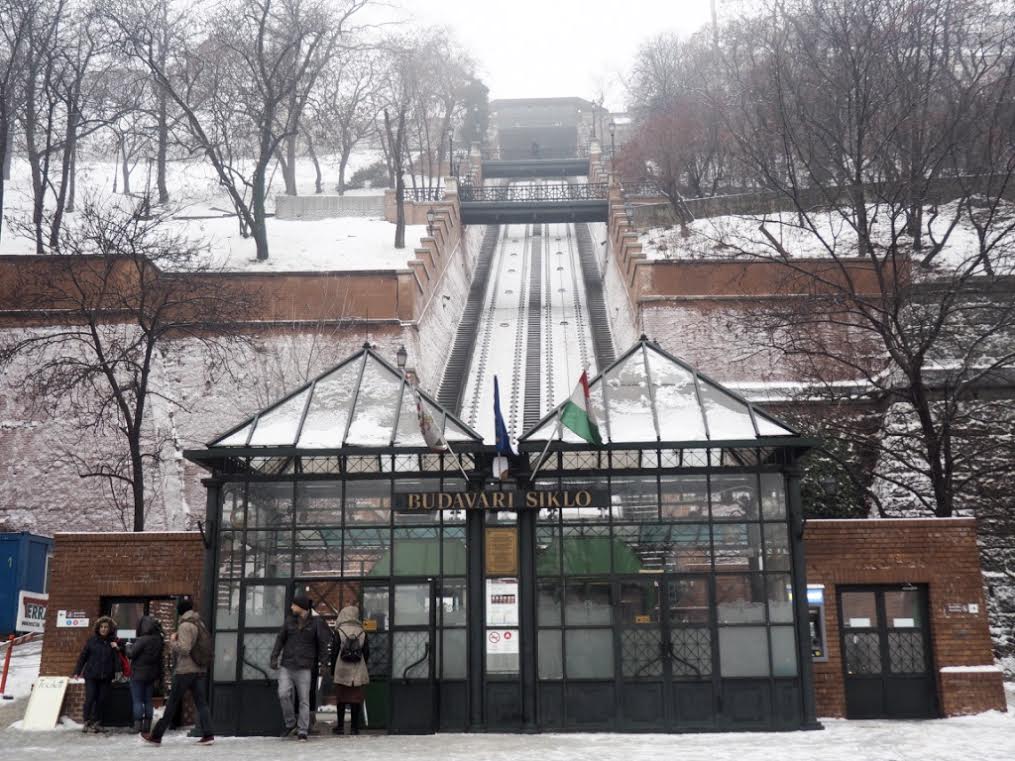 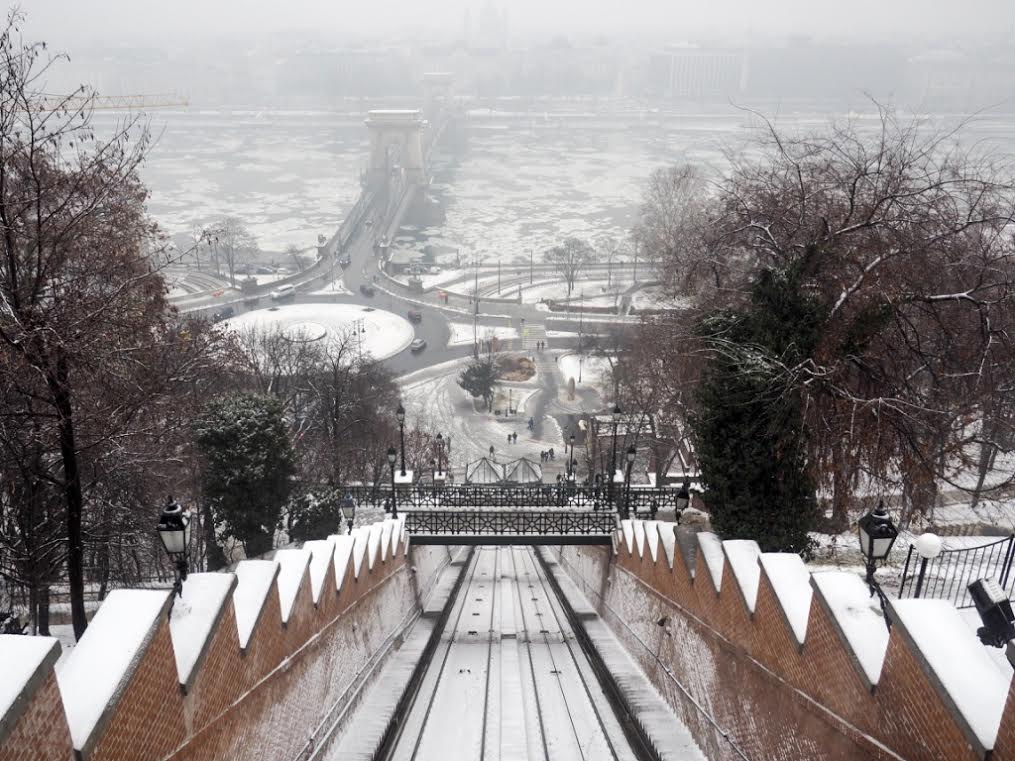 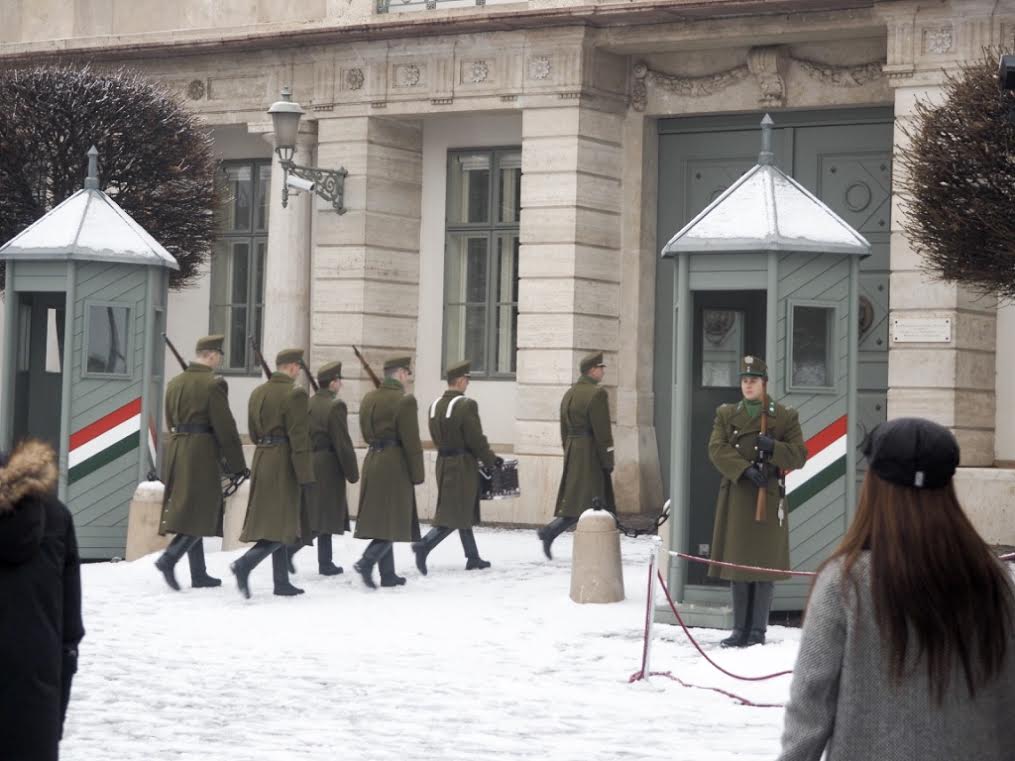 We spotted the funicular on the bus tour, so we walked over the Chain Bridge from Pest to Buda and had a little look. For just 700HUFF, we took the funicular up the hill from to Buda castle. It was built in 1870, but had to be restored in 1986 after it was destroyed during the Second World War. The hill is walkable, but the funicular takes just a few minutes to go up the hill and you get some beautiful views as you travel up.

We explored the castle grounds and walked around for a good hour. We saw the change of guards twice during our trip to Buda castle – as serious as it is, I felt sorry that they kept slipping everywhere on the ice whilst trying to act professional!

Sadly the weather on Thursday was awful so the view wasn’t so great, but it was still super beautiful. The only thing we noted was the lack of signs, as we didn’t know we were even walking around a castle until we went past it again on the night bus tour…

We found a little Italian restaurant near our hotel, that served up fresh, homemade Italian food with a Hungarian twist.

It’s weird because, I went to Hungary expecting to try all their traditional food and wine, but it really was a struggle to find anything traditional! We stayed on the Pest side, which is considered more touristy, so perhaps the traditional eateries are in Pest.

We ordered nachos, (bcos we needed carbs after all that walking) and pizza (double carbs) for our mains. I had a Hungarian pizza, which had onion, mushroom, pepper and tomato on, as well as pepperoni and lashings of paprika dust. It was a lovely little place to eat and chill.

We ducked out and explored the markets near by, where they sold souvenirs, Hungarian food and plenty of mulled wine and cider.

We strolled back to the hotel and chilled all night, ready for another 8am alarm… 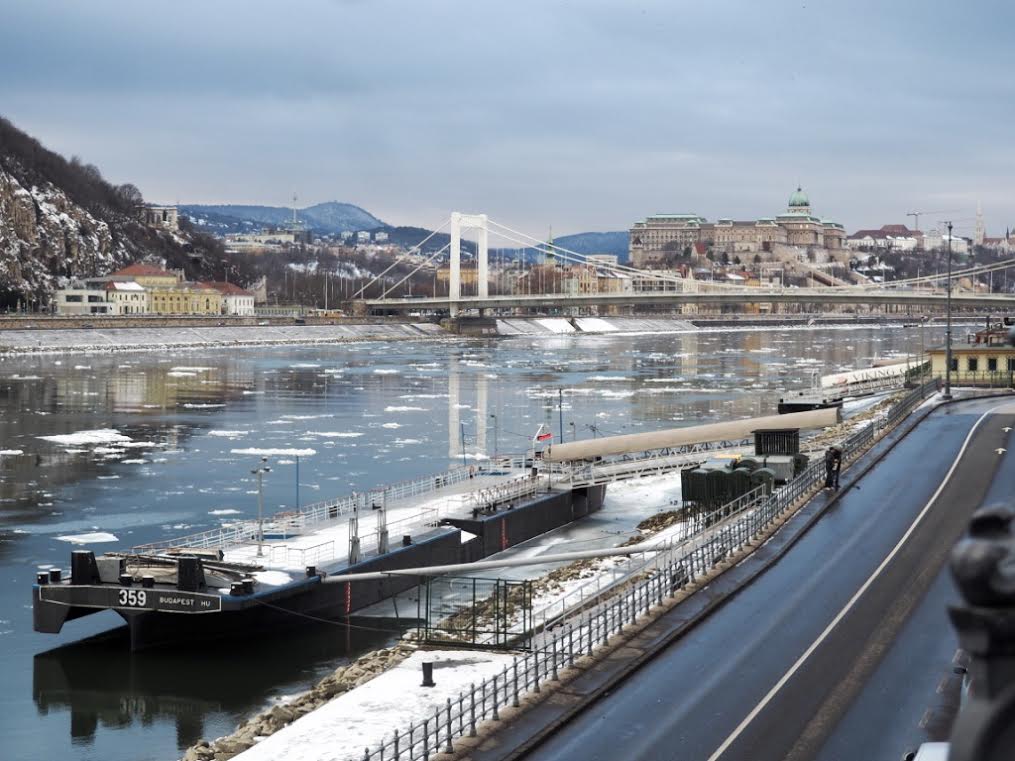 So glad Jade packed her selfie stick, we’ve put it to good use this holiday! Sad to be going tomorrow, but tonight we’re off for Freakshakes, a night tour bus and a trip to a Ruin Bar! 🥂👭 . . . . . #snow #travelblogger #travelphotography #budapest #hungary #lblogger

We used the Big Bus Budapest service all day Saturday – it was a handy little bus to get on and off at to explore different places. We’d completed the two hour route on the Friday, so Saturday we just got off at the places that we liked the look of. We explored Heroe’s Square and went for a walk around a castle and its grounds, which just looked so beautiful in the snow. We walked past a huge outdoor skating rink too – good fun if you’re a confident skater!

My favourite drop off point on the bus trip was Gellert Hill – the views were absolutely incredible and thankfully, Saturday was much clearer and brighter so we could see just how beautiful Budapest really was. Budapest really does have quite a dark past, even this beautiful hill is named in memory of Saint Gerard, who was thrown to his death from the hill. Grim, huh? 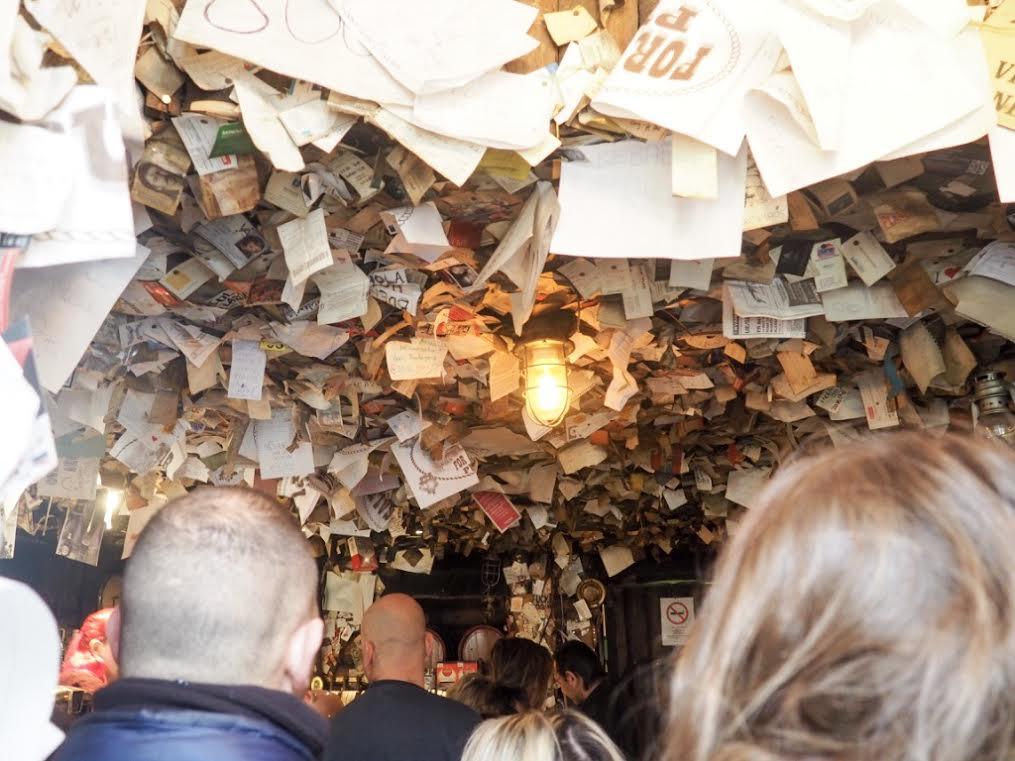 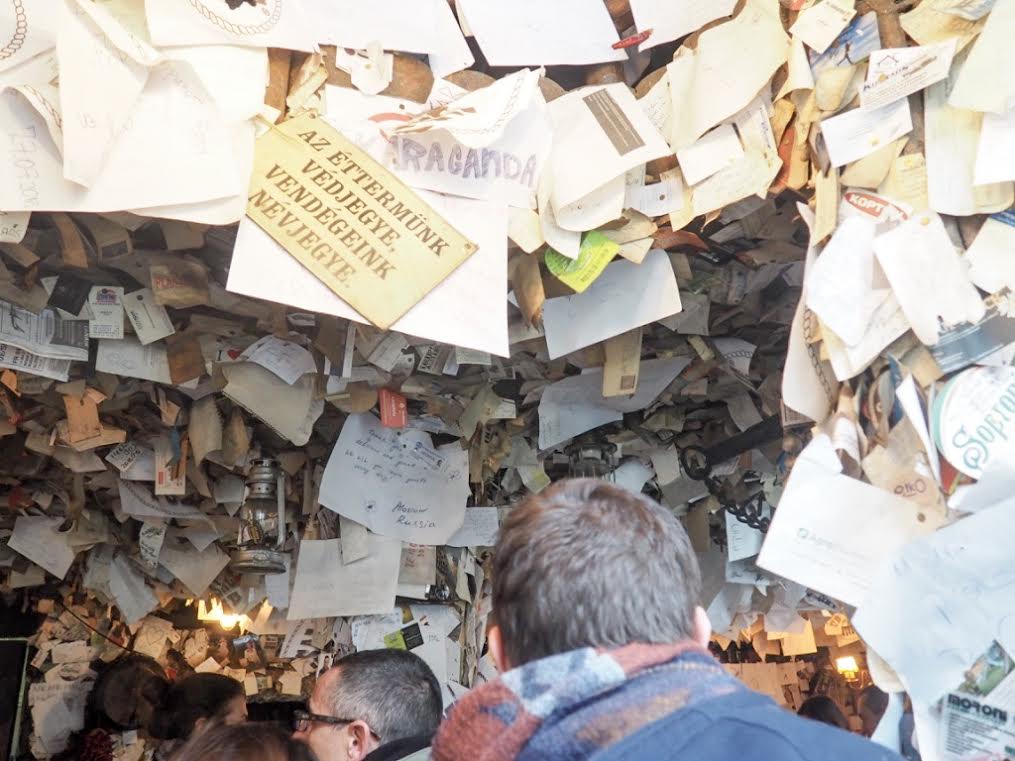 I had pretty much stalked this place beforehand on Pinterest but it was rammed that we couldn’t even get it, sob. Luckily, I managed to nab some photos before we ducked out and visited a little Italian restaurant down the street.

The cafe serves up hearty Hungarian food, as well as hot drinks and snacks. The interior is covered in, you guessed it, post-it notes! Visitors are free to write and stick their own post it notes onto the walls. The floor is covered in straw, and the peanuts that are given to guests are encouraged to drop their shells into the ground. There’s also a roaring fire so it feels cosy and unlike any other cafe I’ve ever seen. A room covered in paper, and a roaring fire in the middle? TOTAL fire hazard but the place looks beautiful. 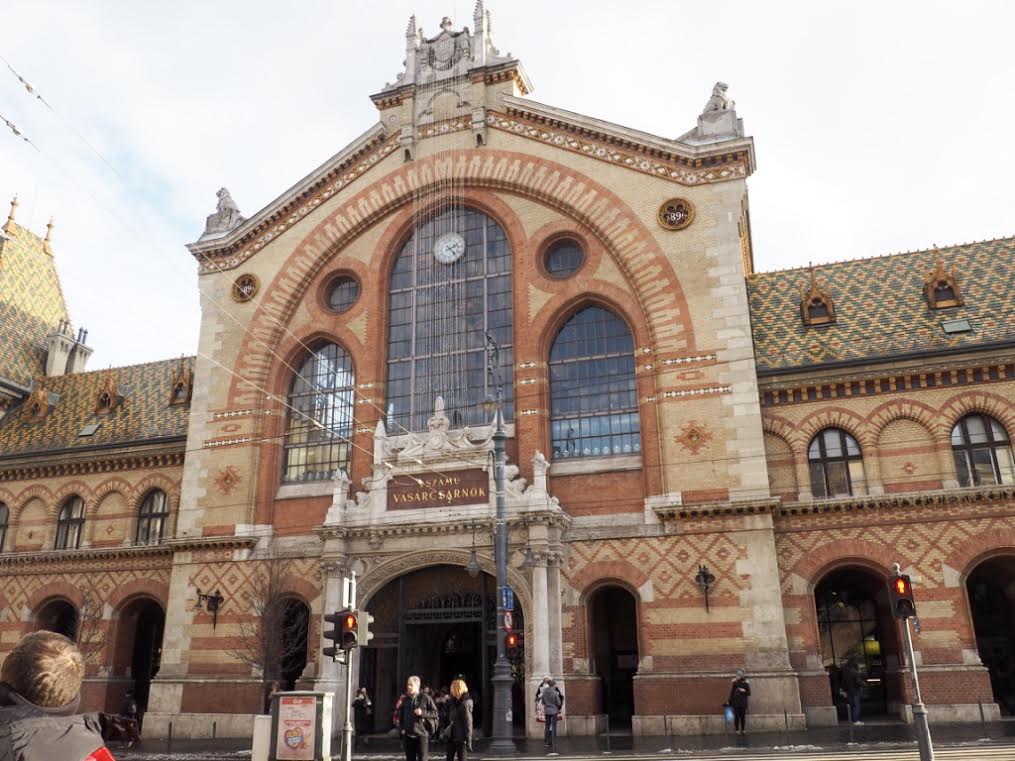 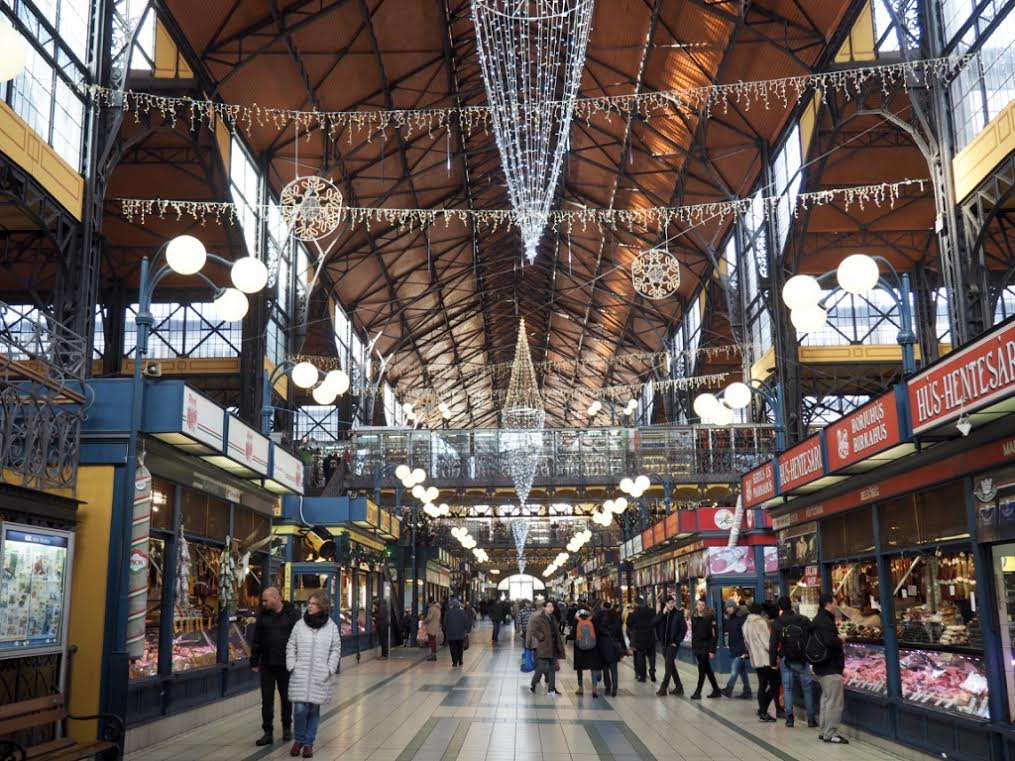 If you’re looking for somewhere to pick up some souveniers, then it’s defintely worth taking a trip to Central Market Hall. It was built in the 19th century and is the largest indoor market in Budapest. The first floor is the food hall, where you can buy fresh food like Hungarian sausages, paprika and wine. On the second floor you can buy every kind of souvenir, from t-shirts, bags and mugs, to photo albums, trinkets and beer steins. The only downside is that it shuts at 3pm, so be sure to get there nice and early to check it all out!

Our last night in Budapest has spent eating Freakshakes, hopping onto the night bus and checking out the cities lights, and paying a visit to a Ruin Bar which is literally the coolest bar everrrrrr. Budapest you’ve been a blast 🇭🇺🇭🇺🇭🇺🇭🇺🇭🇺 . . . . . #lbloggers #bbloggers #fbloggers #budapest #hungary #travelphotography #fdbloggers #travelblogger

A must if you’re
heading to Budapest! There are 22 Ruin Bars in Budapest.

Szimpla Kert was the nearest one to our hotel but it took a good 40 minute walk and a google map use to find the place.

It’s one of those places where if you know, then you know.

It has such a fun, electric vibe. The bar is covered in graffiti and quirky accessories, including cars to sit and drink in, overgrown
plants, fairy lights, sheesha pipes and overgrown plants.

But it’s SO much fun.

There’s a courtyard out the back that is transformed into a outdoor cinema in the summer, and there are even photobooths and dozens of cocktail bars to enjoy! There are around 10 bars to try different cocktails, wines and beers from, a live music room and an open courtyard. It’s just such an unusal but totally unique place to visit – I’m so glad we visited one whilst we were
there!

Ruin bars are held in run down buildings; buildings that are in such a state that they’re on the brink of being demolished. This one in particular used to home a factory and a few homes.

55K steps in a few days and we were shattered! Our flight back to London was at 6am so it was a little bittersweet having to get up at 4am, but we had the best long weekend in Budapest. I can’t recommend the city enough, it’s so beautiful to explore and walk around!

I’m going to be posting a photo diary of Budapest because I have far too many pretty photos sitting there! Stay tuned for a hotel review and a ’72 hours in’ post about Barcelona!