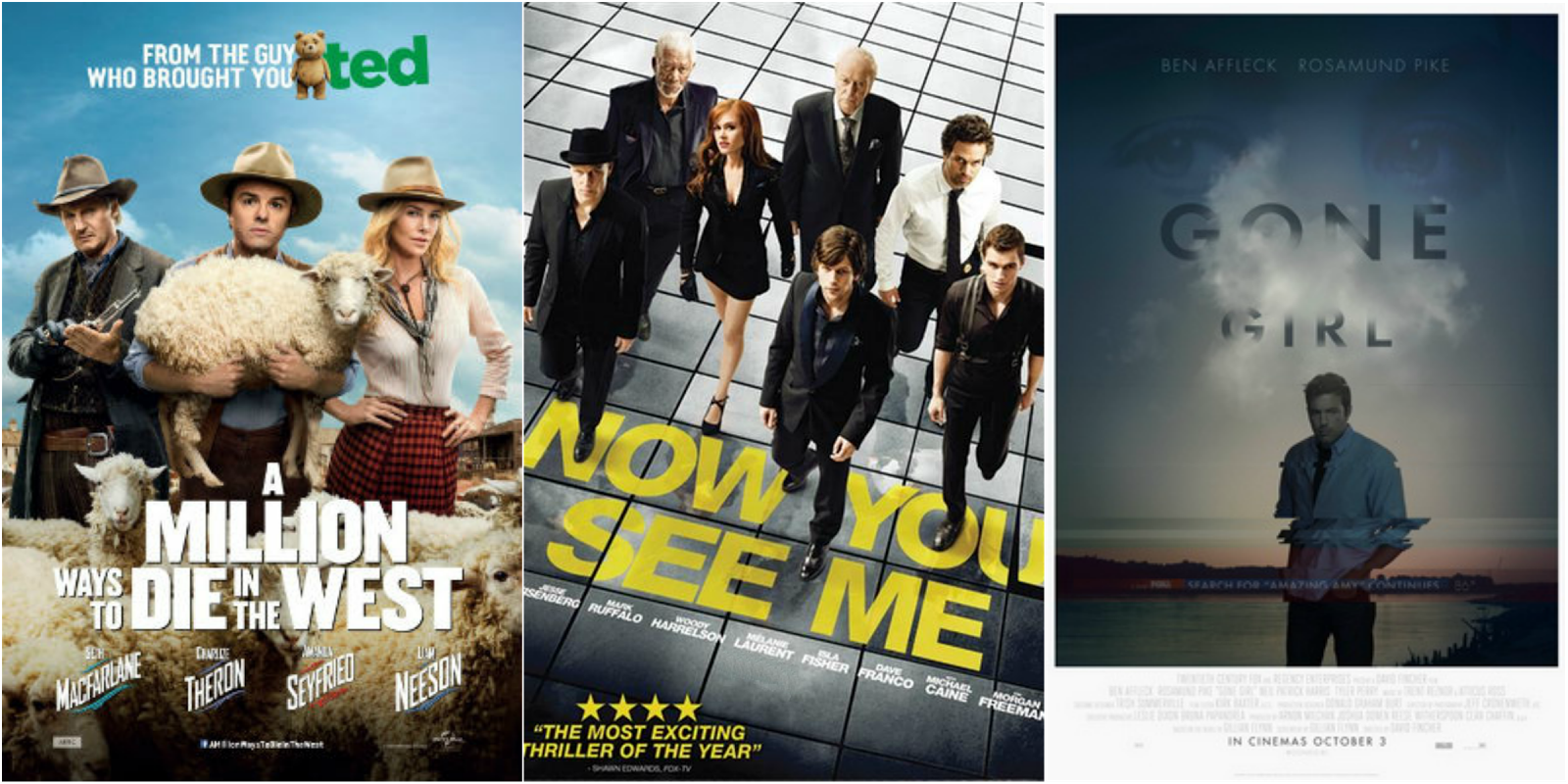 A Million Ways To Die In The West

“As a cowardly farmer begins to fall for the mysterious new woman in town, he must put his new-found courage to the test when her husband, a notorious gun-slinger, announces his arrival” {Source}

My boyfriend picked up this film for us to watch and I enjoyed it! I like Seth MacFarlane, – mainly due to Family Guy and American Dad – but I didn’t find this as funny as I thought it would be. There were references to a few other films that were unexpected but worked really well. The silly/slapstick storyline however is easy to follow, so if you like the sense of humour in Family Guy you’ll enjoy it!

Now You See Me

This film was amazing!! Love love loved it. I didn’t manage to catch it in the cinema so I was glad to get my hands on the DVD. NYSM turned out to be better than I thought it would be. There were loads of unexpected twists and turns and I certainly didn’t predict the ending! After a quick google search, I’ve seen there’s a second one due out in 2016 which I’m really looking forward to. I just hope it lives up to this one!

“With his wife’s disappearance having become the focus of an intense media circus, a man sees the spotlight turned on him when it’s suspected that he may not be innocent” {Source}

I was utterly gripped by the book Gone Girl and managed to read it in just over a day. It was thrilling, action packed and it had the most intricately thought out ending – you definitely wont see it coming! The film was good, but I was annoyed at how much detail they left out. I feel as if the film didn’t play on the thrill and chase as much as in the book. Rosamund Pike, who plays the leading woman Amy Dunne, did play the mentally deranged character extremely well. There are plenty of twists and turns in this film, and an unusual ending. 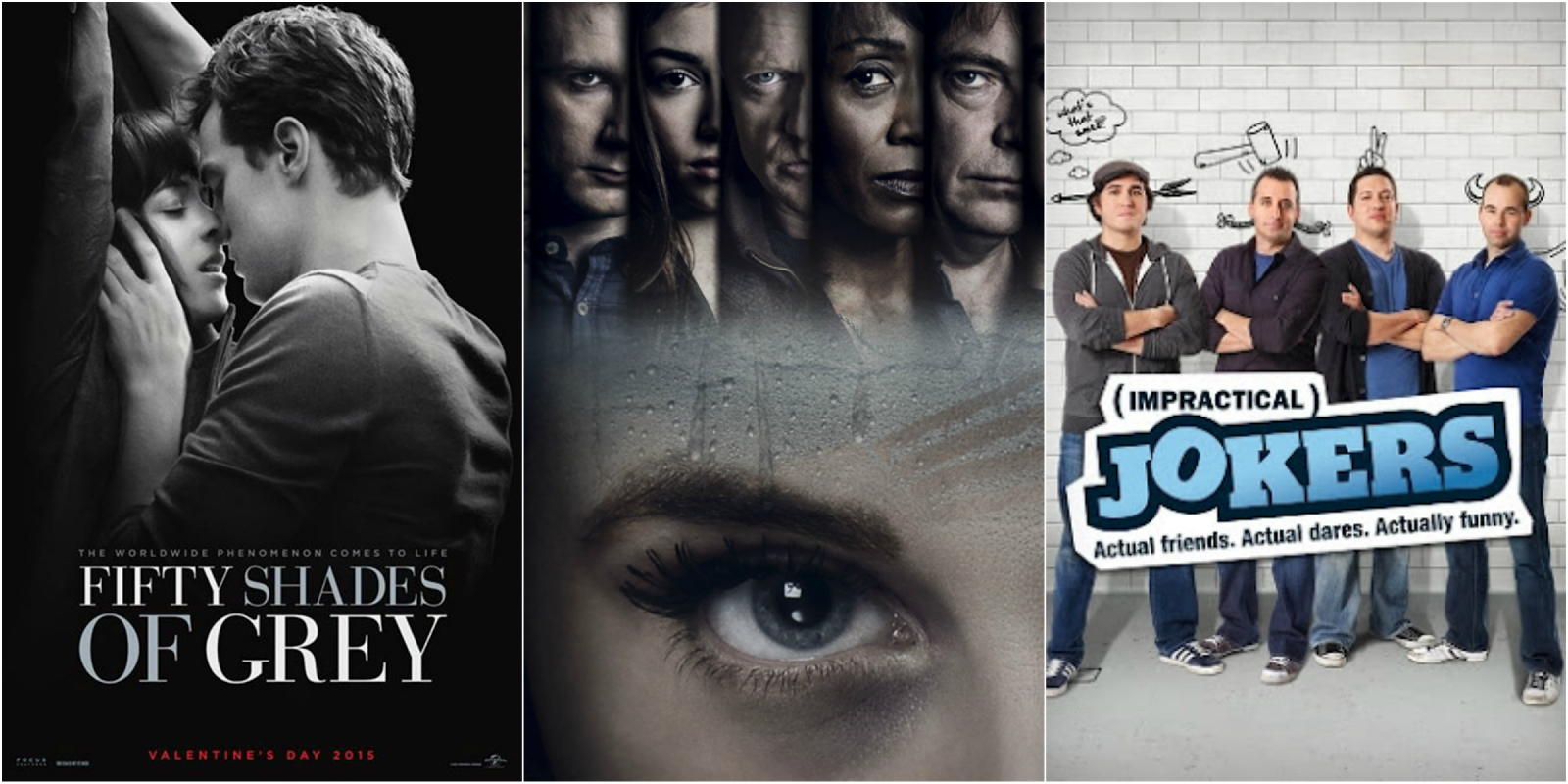 I went to go and see Fifty Shades of Grey with my work friends (all female I might add) and it was one cheeky film. I wanted to see what all the hype was about Grey and sadly, I don’t feel as if it was “all that”. They storyline didn’t develop very quickly and the ending was so abrupt. I’ve been informed by a friend though that it’s the same ending as in the book – pretty annoying though huh? I’d like to read the books and I am intrigued to see whether the next two books will be made into films. If you after a giggly night with the girls, this is the film for you!

I, like the 10 million people who tuned into the Eastenders live week, was completely engrossed in finding out who killed Lucy. I haven’t seen Eastenders since before Christmas, so I think I missed out on some clues and back ground information, but I had a sneaky suspicion it was Jane. So I guess I was half right! I did think it was Denise at one point though, and that Lucy could have been under the bed… dun dun dun. The final episode was incredibly tear jerking and Adam Woodyatt, who plays Ian Beale, played it remarkably well. Looking forward to seeing how the story progresses!

“Q, Sal, Joe and Murr are real-life best friends who love challenging each other to outrageous dares and stunts ever caught on hidden camera” {Source}

This is by far the most hilarious TV show. Ever. I always watch it with my sister and dad and we’re forever left in floods of tears. Q, Sal, Joe and Murr, best friends from high school, challenge eachother to the most hilarious dares and if you fail to complete the dare, you lose the round. The loser at the end of the show is subject to a forfeit which are 100% the funniest things ever. The best show to watch as a pick-me-up!

What have you been watching this month?