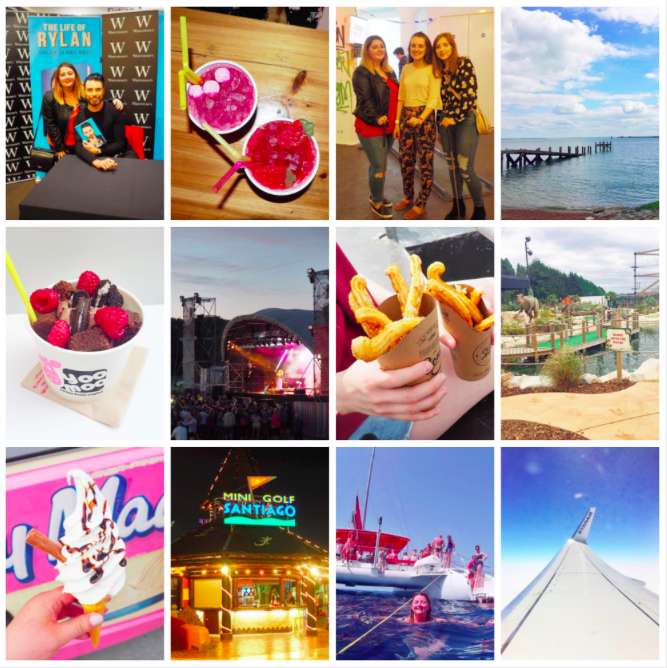 July has been fairly nice to me. I attended a couple blog events, ate more froyo and went on holiday…

At the beginning of the month I was invited to Intu Lakeside Everyone’s Invited VIP Event and it was such good fun! We got to meet Reggie N’ Bollie, ate ALL the food and had a little meet and greet with Rylan! It was lovely to meet a few more Essex bloggers and I’m looking forward to seeing what Intu Lakeside have up their sleeves for the rest of the year.

I couldn’t go to Junkyard Golf and not try one of their cocktails – I’d seen them plastered all over Instagram and I obviously needed to try one as a result! I had one with strawberry sweets on top which was super yum. £9 seemed pretty steep but it is London after all!

I met up with the girls from uni and we went to Junkyard Golf in London. It was a fun evening and we had plenty of laughs. We chose the Helga course – a UV/Club themed course – and it just made me want to do them all! Our one navigated around barbies, a sand pit and a speed boat and a buggy… it’s something different to do in London.

On a rare hot day in Essex, I went to Southend for the day and had a game of crazy golf (surprise surprise) and a slush puppy beside the sea.

I bloomin’ love frozen yoghurt, (the sooner Chelmsford gets a froyo shop the better) and YooMoo was no exception. I went for a tonne of fruit and oreos and brownies and it just tasted so damn good.

6. BSTK Festival With We Are Full Fat PR

An email dropped into my inbox and I was so. flipping. excited. Being made redundant has its advantages as I was able to go to BSTK Festival for the weekend, and enjoy watching performances from acts like Tinie Tempah, Scouting For Girls and Wretch 32 in the VIP section. It was good fun and it had a nice chilled out atmosphere, I’d definitely love to go next year and camp.

Isn’t festival food just the best?! The churros at BSTK Festival were so yummy. Deliciously hot, sprinkled in cinnamon sugar and a pot of nutella to dunk them in to. Yum yum.

I found another crazy golf course. NO YOU’RE ADDICTED. The Jurassic Falls course in-between Chingford and Walthamstow was a dinosaur themed course taking you through water falls and rivers. It’s geared up for kids as well, with little placards with information and facts on.

I went to the Walthamstow Garden Party for a couple of hours, which was a lot busier than I thought. It took around 30 minutes to queue up to get in, but the park was rammed with food stalls and bars and entertainment aimed at families and groups of all ages. I had my first ice cream from an ice cream van, too. Eeeeeep.

I’ve been in Tenerife on holiday for 10 days and I managed to scout out a crazy golf course. Yay me. It was such a good course and there were plenty of obstacles and props to work your way around.

11. Swimming In The Atlantic

We went on a couple excursions in Tenerife, one being a whale and dolphin boat trip. We saw a family of 12 whales swimming together which was just adorable. We got to swim for a bit as well, the water was nice and pretty clear.

We had a lovely family holiday in Tenerife and I’m looking forward to putting a photo diary together. It’s a beautiful country and the weather was so nice and hot every day. I’m missing the buffet breakfast already – where my doughnuts at?